It was the great day I had. There are nearly 1400+ Flex /Flash Developers have attended the Summit. There are two tracks namely Track1 and Track2. Track1 is for Flex Developers who already having some experience. Track 2 is for New Flex Developers. I have joined with Track1.

DEV Summit: “It was the Great Day for all the Flex Developers.”

As per the theme “Awesomeness defined”, it was really awesome in terms of the Features and Futures of Flash Platform Technologies.
I start with two Quick Questions; it will help you to understand my experience,

Serge starts with the introductory speech about Flash Platform; in continue with Ben starts his speech from Features and Availability of Flash Platform Technologies. Everyone in the Summit was thrilled and freezed for few minutes, not because of the climate, Features and Futures of Flash Platform technologies are the key reasons for the Freeze. Ben speech is all about Business terms of Adobe, since he is from Cold Fusion Team; Serge speech is related to the Key Features of Flash Platform Technologies which includes Flex, Flash Player and AIR.  During this, Serge put a challenge to himself. Here is the Challenge, “I’m going to build the Flex Application starting from the Design to Back End Connectivity within 15 minutes”, everyone in the Summit was murmured with themselves about this hard challenge . Finally he had finished the Challenge within the given span of time, which shows the POWER of Flash Catalyst and Flash Builder. During this challenge everyone was keen to watch his activities, it was very interesting . After this interesting Challenge, the video was played from Adobe Flash Team; it’s all about the Features of Flex and AIR Applications in the Commercial world.

He talks about the following main things in Flex 4 SDK over Flex 3 SDK,

He starts his demo from Adobe Photoshop towards Flash Builder. He developed the mini Twitter application in Flex using PS, FC and FB.  He gave simple four steps for this Application Development; here is the steps you go,

FXP is the File format of Flash Catalyst to Flash Builder. We can also test and run the Design from Flash Catalyst by pressing Ctrl + Enter. He insisted this shortcut .

This itemrenderer used in the DataList to show the list Tweets and Profile Image of the Particular person (typed from the TextInput). He completely designed this Renderer in Flash Catalyst and switched to Flash Builder by importing the FXP file. In Flash Builder, the FXP file provides the Complete Package Structure (model/view/components) and main.mxml file. Then he has added the Twitter API inside this package and configured with real time Twitter Site. Application is finished within 30 minutes. Everyone gave their applause.

He talks about the RPC Services in detailed. He demonstrated the simple employee application, with the integration of MySQL database using Apache server. It shows the Powerful feature of Flash Builder 4.

In this Employee application, he fetched the Employee details from the MySQL database using simple configuration in the Flash Builder. It is the great feature of Flash Builder. It really saves the developer time.  He also added two line codes to create the form (details of the particular employee).

The application is like this:   First Name and Last Name in the DataGrid, while selecting any item in the Grid, the Employee details will be displayed in the Form.  We need not write any code for this form, using simple wizard we can create.  This wizard is full of Configuration of Services.
The interesting thing here is Automatic Paging; it saves more space in the Browser. Next interesting thing is, If any item  fetched from the DB, it is stored internally, if the same item needed in future, we need not make a new service call to get that item.  It will get the data from the internal storage and display. It’s the power of DataCentricDevelopent (DCD) framework in Flash Builder.

In Flash Builder we have the following new features,

He started the discussion from comparison of LCDS and Blaze DS.  Both are used for J2EE integration. BlazeDS is the OpenSource having minimum features compared to LCDS ES. Live Cycle Data Services – Enterprise Services (LCDS ES) 3 Beta having powerful features for the Integration. It can support AMF/AMFX encoding as well as SOAP related web services. It has improved RTMP / RTFMP Streaming facility.

They have introduced new DataModel – FIBER for flexible Data Objects management between Flex and J2EE.  This Data model provides the Entities, Services and Annotations details of the Class and Data Objects present in the server. The File format of this DataModel is .FML ( Fiber / Flex Markup Language).   Due to short span of time, he unable to demonstrate the Integration of Flex with LCDS 3.

The theme of this topic is Create -> Package – > Distribute -> Discover.

Finally the Adobe Team shown some interesting on Flash Player availability and its upcoming features. Everyone in the Summit was excited. According to the survey Flash Player playing major role in the WEB WORLD. There are millions of Flash Player download everyday, Adobe Team said. Adobe AIR is about 27+++  millions at the desktop. This shows the Power of my favourite Flash Platform.

This is my Experience from Adobe DEV summit, 2009 Bangalore. I know, I missed some points .
Hope you will get some idea on the Flash Platform Technologies. .

We’ve got an interesting tool for testing Flex UI parts…. FlexMonkey developed by Gorilla Logic.. FlexMonkey is an Adobe AIR application used for testing Flex- and AIR-based applications. Providing the functionality to record, playback and verify Flex UI interactions, FlexMonkey also generates ActionScript-based testing scripts that you can easily include within a continuous integration environment.

Some of its features are,

* Records and plays back Flex UI interactions
* UI Interactions can be edited and replayed
* Generates FlexUnit TestCases, and can also be used with non-FlexUnit-based testing frameworks
* Works with Flex and AIR apps
* Apps can be tested running standalone or in a browser
* Tests can be run from build systems such as Ant
* Handles all Flex UI events
* Uses Flex Automation API to provide native control over your flex app. Requires no javascript or browser plug-ins to use.
* Unit tests are written entirely in ActionScript. No other programming or special purpose scripting languages are needed to develop comprehensive UI test suites.
* Non-invasive. Requires no modifications to your application source.

I’m also new to this.. Have to play soon… Let see how it works.. I will try to post my experience on this tool very soon…

Every Year Adobe Organizing a BIG INTERNATIONAL CONFERENCE – MAX, where you can find a large number of Adobe Tech Bees around the world ( like me )

In MAX 2008, Adobe CTO – Kevin Lynch Speech was awesome, he is the Key Player of Adobe, the way he portrayed the Flash Platform technologies was really stunning… Also the technologies and its features are explained as a Real world entity, which was attracted by more Audience.

I know, you have one small question in your mind “How this guy have attended  the Session?”…

Simple, I have seen the Speech in Adobe TV web site..  It was superb quality…

In MAX 2008, most of the Tech Bees asked many queries and some bees conveyed the issues on Adobe Technologies. To avoid such related issues discussion, this year they have launched the site called “EDGE“, there you can post and submit the issues on Technologies and Products.

Following are the Hot topics planning to discuss at MAX 2009, Los Angels on October 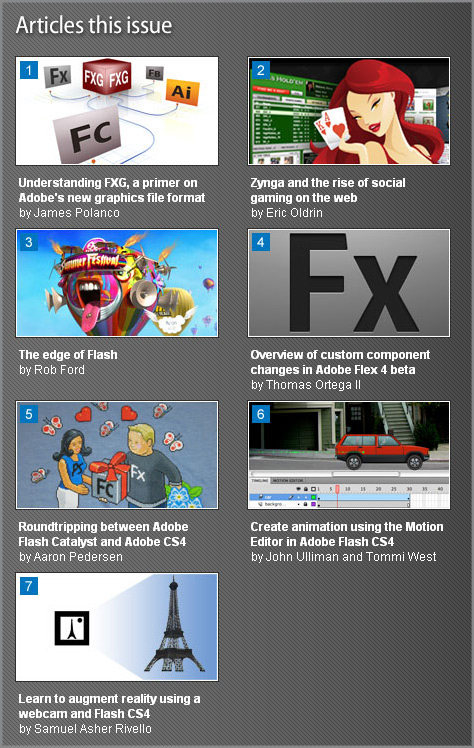 Be ready for the GOOD SHOW..:)

Hi All my AIR Enthu’s,